École de Commerce de Lyon has the pleasure to invite you to the 59th edition of “Petits-dej’ de l’économie”, on friday december 14 at 7:45 am.

Mr Aulas will exchange on the following subject :

“OL City : a new citizen model for the territory and its people”

Born on march 22nd, 1949 in l’Arbresle, he studied computer science and management. That lead him to create his first company, with 3 associates. At only 21, his company CEGI (European Center of Management by Computers) is a commercial success. That is why it is bought 18 months later by Cegos.

After having worked for about 10 years with Cegos, Mr. Aulas left to create CEGID in 1983. 4 years after, CEGID is listed in the european stock exchange and supplies softwares for professionnals all over the world. It is a tool helping companies to improve their management, development and performances.

But Jean-Michel Aulas is also a sports’ fan, he practiced handball during his studies and is very interested by football. That’s why he accepts to integrate the Olympique Lyonnais’ board of directors in 1983. The football club was having financial and sportive troubles, and the management skills of that entrepreneneur would correct the situation.

15 years later, the club has been promoted in 1st division but also listed in the stock exchange. Indeed, the development strategy of Olympique Lyonnais is based on tickets, TV rights, advertising, derivative products and players’ trading. That strategy was very efficient, both on sportive and financial sides, and many actors in the football and business worlds recognized the quality of such a management.

During the 2000s, the club enforces its domination : 7 consecutive France’s championship titles, 2 Cup of France and 6 Champions’ Trophies.

Nowadays, OL is still one of 3 biggest french football clubs and its turnover is estimated at 290 millions of euros. Furthermore, the group has been a precursor in women’s football and it figures among the european top 5. On another side, CEGID had a 243 millions of euros turnover in 2017.

These successful entrepreneurial adventures show the management and financial skills of a passionate man who leaves nothing to chance.

It is a future place of life of 45 hectares built around the modern Groupama Stadium, 1st totally private and independant stadium in France. Since its opening in 2016, the project has been developing really fast. Indeed, the Kopster Hotel opened its doors on october, 1st of 2018 and many structures will be added. For example: an office building, a leisure center, an analysis laboratory and a medical center.

That project fits in the development of Lyon’s economy and is oriented around the influx generated by the stadium which can leads to leisure and business.

Debriefing of the event

This 59th edition of Petit-Dej’ de l’Économie started by a traditional breakfast around a coffee, fruit juice and pastries.

Once everyone were all set and ready, the presentation started. Mr. Aulas first presented, with a promotional video, the Groupama Stadium and the various events and sports meetings it can host. Some words were said about the architectural beauty of the stadium and Olympique Lyonnais football club’s performances.

In a second time, Mr Aulas approached the OL City project, by emphasizing on corporate social responsibility (CSR), the reasons of its building and the benefits that the project will bring to the city of Lyon.

Indeed, many buildings are already set, like the Kopster Hotel, and others will soon arise.

Another positive point, the project created more than a thousand jobs since its beginning. A really promising number according to Olympinque Lyonnais’ president.

Moreover, various subjects have been approached like the victory of France during FIFA World Cup’s final with a thought for Nabil Fekir, who couldn’t come on this december 14th, and more human themes like the partnerships with Hospital Léon Bérard and hospital Femme-Mère-Enfant.

Finally, people had the chance to talk and ask questions. Journalists, entrepreneurs and associations were able to ask various questions, like the budget you need to build such a stadium but also more sensitive questions about the present situation in France. Every person who spoke never forgot to mention their admiration for Mr. Aulas. 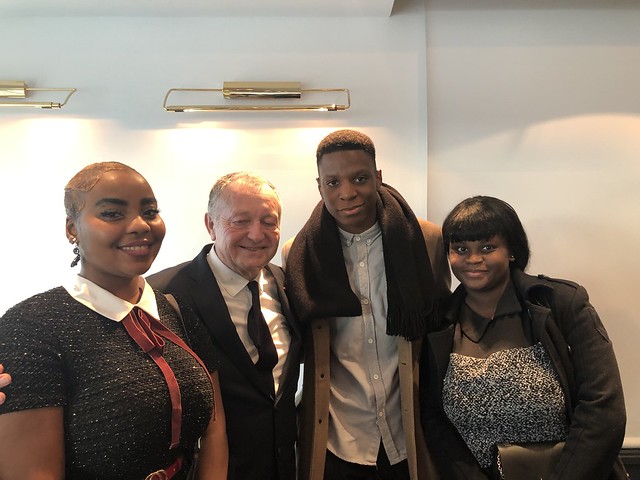