École de Commerce de Lyon has the pleasure to invite you to the 58th edition of “Petits-dej’ de l’économie”, on friday november 16th from 7h45 am.

Mr Zurawik will exchange on : 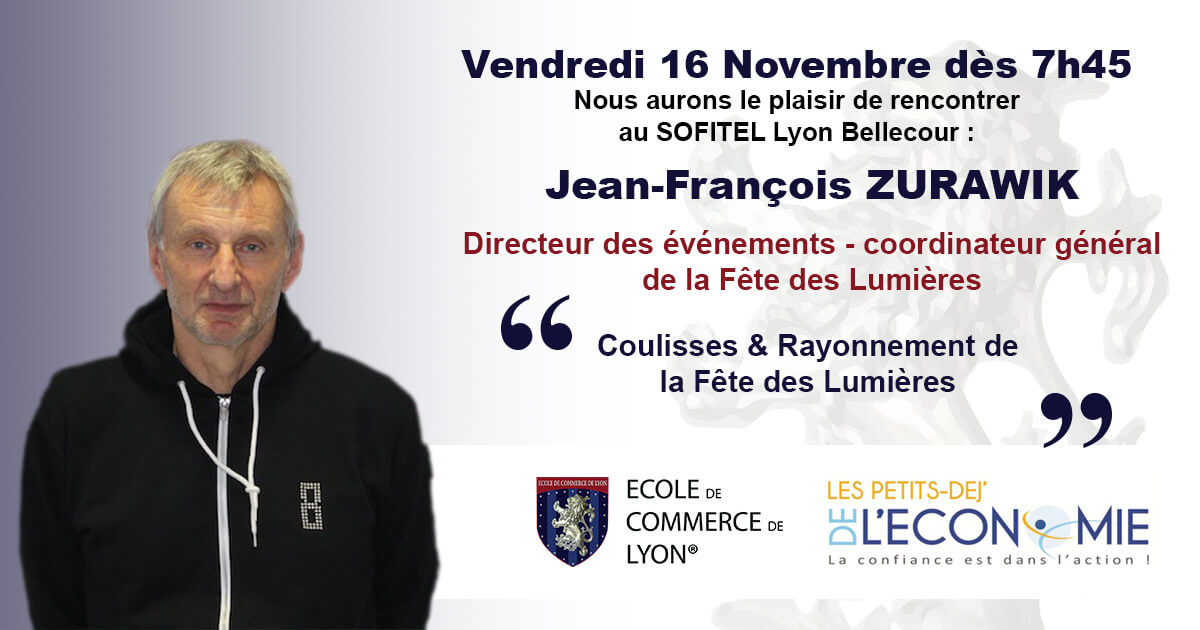 The wish of the aldermen

A first church dedicated to the Virgin is built in Fourvière in 1168. It is partially destroyed during religious’ wars that oppose catholics and protestants (1562). Restored, it welcomes the successive wishes of inhabitants and aldermen against epidemics. On september 8th in 1643, city councillors at times go to Fourvière to ask Virgin Mary to protect the city against the Plague coming from south of France. They make the wish to renew that pilgrimage if Lyon is spared. That wish is still honored on september 8th.

A tradition born in the 19th century…

In 1850, religious authorities launch a contest for the building of a statue, considered as a religious signal on the top of Fourvière’s hill. It is sculptor Joseph-Hugues Fabisch who builds it in his Quais de Saône’s workshop.

The opening ceremony initially expected on september 8th 1852 is postponed to december 8th due to a water level rise in the Saône. On the due day, bad weather will again contradict festivities : religious authorities are about to cancel the opening. Finally, the sky is clearing itself… Spontaneously, Lyon’s citizens place candles on their windows, and from nightfall, the city is fully illuminated. Religious authorities follow the movement and Fourvière’s chapel appears from darkness.

That night, a true holiday is born !

Every year from now on, on december 8th, Lyon’s citizens place candles on their windows and travel across the city in order to admire exceptionnal luminous installations.

… which evolves in the 20th

In 1989, heritage sites, hills and rivers’ landscapes, districts and streets are brought to light to embellish the whole city. It participates to the nocturnal environment and the beauty of the territory. Since 1999, Fête des Lumières runs through 4 days, during that period, millions of people will walk around the city.

Artistic programmation of the first light festival for the Divali’s celebration, under the authority of tourism’s ministry in Port Louis and Curepipe

Do you wish to participate ? Register by sending an email at service.communication@eclyon.fr